A team of enthusiastic volunteers, supported by Museums Victoria, have been actively working since 2008 to restore the iconic Great Melbourne Telescope for a return to its original location at the Melbourne Observatory adjacent to the Royal Botanic Gardens.

The telescope was significant as the first large telescope with an equatorial mount and clockwork drive, allowing automated tracking of celestial objects. This year the telescope celebrates the 150th anniversary of its installation.

We are currently searching for volunteers with skills in mechanical engineering, machine fabrication and/or CAD drafting to join the restoration project on Tuesdays and/or Thursdays at Scienceworks, Spotswood.

In you have the necessary skills and would like to join the project, then please click on the ‘Apply now’ button below and complete the online form.

ABC cameraman Michael Barnett has been checking in every now and then on our restoration progress since the project began in 2008. His following video first aired as a segment on the ABC Australia Wide program on 26 November 2016.
It features Richard Gillespie (Head of Humanities, Museums Victoria), Jim Pollock and Dr Barry Clark (Astronomical Society of Victoria members and Research Associates at Museums Victoria), Tim Entwisle (CEO, Royal Botanic Gardens Victoria), Nev Quick (Collection Storage & Logistics Manager, Museums Victoria) and a host of volunteer team members working on the project.

Photographer Liz Clarkson visited our restoration workshop this month to photograph the team and research an article for the online publication The Northsider. Here is a link to her article about the project, called “First Light & Dark Matter”.

The historic Great Melbourne Telescope of 1869 originally utilised Huygenian (pronounced “high-gee-knee-yan”) eyepieces. These original eyepieces still exist and are preserved in Museum Victoria’s collection, but the precise specification of these eyepieces was not fully known. Recently a thorough and detailed measurement of each eyepiece was conducted. The overall dimensions of each eyepiece element and the curvature of the lenses were measured, and a Foucault knife edge test was performed to determine the focal lengths.

ASV volunteer Barry Adcock utilised his own home made equipment to perform the Foucault knife edge test.The test measured the back focal length of the eyepiece lens, using red, yellow and blue LED light sources. The figures obtained were used to calculate the refractive index at each colour and thus the dispersion of the glass. Both refractive index and dispersion are necessary in order to specify the glass used.

The Foucault test can be illustrated using the exaggerated diagram below. The light source is narrowed to simulate a point source similar to a star. The light rays pass through the lens being tested and are reflected off a flat mirror behind the lens. The reflected light passes back through the lens again and is observed at the knife edge at the place of the original LED light source. The spacing between the lens and the knife edge is adjusted (while the eye remains still and can still see the light source), until the reflected image of the light source looks to be shadowed, i.e., is nulled. At this point the system is in focus and the back focal length can be measured with a rule as the spacing between the lens and the knife edge. Calculations are then performed to determine the actual focal length of the lens. 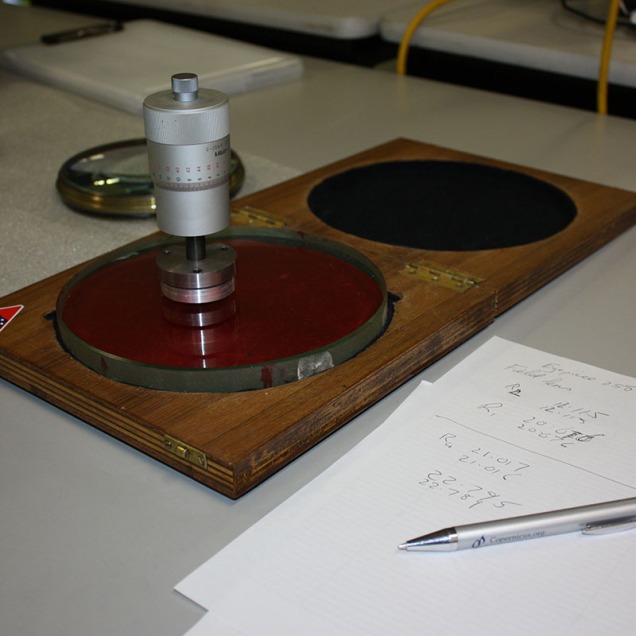 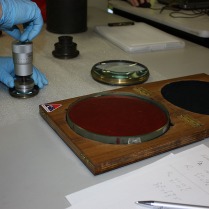 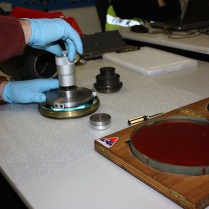 Once the curvature and focal length of a lens are known, the refractive index of the glass can be calculated. This data is essential to design new replica eyepieces for use with the restored telescope and it also gives an insight to the availability and specification of optical glass of the 1860s.

Over the Easter weekend (25-28 March), the biannual National Australian Convention of Amateur Astronomers (NACAA) was held in Sydney. Barry Clark, one of our restoration team’s members (and ASV volunteer) presented a poster paper entitled “Progress report on reconstruction of the Great Melbourne Telescope”. Other ASV team members who attended were Barry Adcock, who presented a paper “Infrared studies of the atmosphere of Jupiter”, Barry Cleland and Ian Barry.

Barry Clark said that many delegates showed a considerable interest in the project.

The NACAA is a biannual event and it was last hosted by the ASV Victoria group in 2014 and it included a visit to the GMT workshop.

Download a copy of the report – Progress report on reconstruction of the Great Melbourne Telescope (PDF, 1.7MB)

On Saturday 19th March 2016, we hosted an excursion to our GMT Workshop for 19 members of the Instrument Making Section of the Astronomical Society of Victoria. The members had a keen interest in how the project was progressing. Many had not seen the project before and were impressed with the scale of the telescope and the goals of the project.

A special thank you to Museum Victoria staff members, Nev Quick and Matthew Churchward, who volunteered to open the workshop ‘out of hours’ and supervise this visit, and the seven ASV GMT project volunteers who hosted the visit.

Staff from Heritage Victoria visited our GMT workshop on Thursday 3rd March 2016 for a special excursion to check out progress on the restoration project. Director of Museum Victoria, Patrick Greene, hosted the visit and Richard Gillespie (Head, Museum Victoria, Humanities) was on hand to talk about the history of the telescope. Curators, Matthew Churchward and Matilda Vaughan provided a review of the progress on the restoration project and its technical challenges.

All the latest GMT news, including details of the upcoming optical design workshop.

Melbourne Observatory had a long wait for an “official” opening – 150 years, to be precise. After a decade of astronomical operations, the Williamstown Observatory was closed and a transfer of equipment took place in 1863 to grand new facilities on land excised from the Government House reserve, adjacent to the Royal Botanic Gardens.

END_OF_DOCUMENT_TOKEN_TO_BE_REPLACED

Having achieved an adequate degree of documentation of the GMT parts, we have developed more than 40 written proposals for engineering work on some of the parts, and on a frame to hold the entire telescope.