The Great Melbourne Telescope was a revolutionary telescope design, and a triumph of mid-19th century engineering. Prior to the GMT, the large reflecting telescopes of astronomers such as William Herschel and Lord Rosse were unwieldy beasts, requiring manual handling and tracking by teams of labourers.

Thomas Grubb devised an equatorial mount for the telescope that required just one assistant in addition to the observer. The GMT also incorporated a mirror support system that could substantially control flexure of the massive mirror – this idea had been devised by Grubb for use on Rosse’s Leviathan. Rather than having the observer placed dangerously at the top of the tube, the GMT eyepiece conveniently remained in the vicinity of standing eye height.

Many of these features would influence telescope design for the remainder of the century and beyond. But the GMT had its limitations, and the speculum metal mirrors were a constant headache to the observers and maintainers.

The GMT was used primarily for the systematic revision of the southern nebulae, comparing observations with the GMT with those undertaken by John Herschel in the 1830s at the Cape of Good Hope. The observations suggested that some significant changes had taken place, but it was difficult for astronomers to be sure if the apparent changes were real or a function of different instruments and observers.

The GMT was also used for photography and spectroscopy. It allowed the first observation of the spectrum of an extragalactic nebula. Its photographs of the moon were some of the finest taken in world in the 1870s, and its photos of nebulae the first taken in the southern hemisphere.

Its greatest astronomical achievements awaited its removal to Mount Stromlo Observatory in the 1940s and rebuilding with a modern mirror in the late 1950s.

Contemporary Assessments of the GMT

It is a Masterpiece of Engineering. Its movements are surprisingly smooth and steady; it can be moved to any portion of the sky, even if it has to be reversed from one side of its pier to the other, in less than a minute by two operators and with very little exertion.
– Royal Society of London Committee, Feb 1868

In conclusion, I freely express my opinion that the entire instrument is a great triumph of mechanical engineering and optical skill; and, with the advantages of efficient working and a fine atmosphere, I trust it will add something to our knowledge of the heavenly bodies.
– British astronomer William Lassell, Feb 1868

As in all instruments of large aperture, atmospheric condition is all important in the use of this one, and only those who have had experience observing with such instruments can form an idea of how limited are the hours per year, even in a climate like that of this part of Australia, in which such large apertures show the full extent of their powers. On the average of ordinary fine nights, the performance of this telescope on a planet or a double star is disappointing—except perhaps in occasional glimpses—to one accustomed to observe with smaller apertures; but on really good nights it is quite different, and such occasions show the most delicate markings on Saturn, clear separation of discrete points in some of the resolvable nebulae, and a separation of close double stars, indicating an optical perfection which under other conditions was not apparent.
– Robert Ellery, Observations of the Southern Nebulae made with the Great Melbourne Telescope, Melbourne, 1885.

Observations of the Southern Nebulae

The GMT was primarily used to observe the southern hemisphere nebulae, to detect whether changes had occurred since they had been observed by John Herschel at the Cape of Good Hope in the 1830s.

Astronomers debated whether nebulae were gaseous clouds in space, or star clusters so distant that they simply appeared to be clouds. Sufficiently powerful telescopes could hopefully resolve the nebulae into separate stars, or reveal other significant changes. This approach was reinforced in 1845 when Lord Rosse used his 6-foot Leviathan to determine that nebula M51 was resolvable into a spiral galaxy.

The observations with the GMT suggested that changes had occurred in the nebulae, and this seemed to suggest that at least some of the nebulae were gaseous clouds rather than star clusters, which would not show such changes.

It seems difficult to imagine any conditions of aperture, definition, or other disturbing causes which could produce a view at all approaching to that seen by Sir John Herschel. We have therefore evidence of much weight that enormous changes have taken place in this wonderful region.
– Albert Le Sueur, ‘On the Nebulae of Argo and Orion, and on the Spectrum of Jupiter,’ Proceedings Royal Society of London, 1869/70, v 18.

A systematic revision of all the smaller southern nebula, commencing with those figured in Sir John Herschel’s work, has been entered upon, and the results are already most remarkable as indicating striking changes in many of them since they were drawn by the late illustrious astronomer.’
– Report of the Council of the Royal Astronomical Society, Feb 1875

But the GMT observations could never really be conclusive. Too much depended on the variability of the observer, the atmosphere, and the difficulty in recording observations as pencil sketches, to be sure whether the changes were real or only apparent. Robert Ellery also had great difficulty in finding a suitable printing technique to reproduce the drawings accurately, for dissemination to astronomers around the world.

From 1864, William Huggins in England had used a spectroscope to show that some nebulae had spectra consistent with being gaseous clouds, while others were clearly star clusters. The GMT was fitted with a spectroscope, and its observers undertook some of the earliest spectroscopic analyses of southern nebulae.

Photographic equipment for the GMT arrived in 1872, and an elevated stage was erected at the northern end of the GMT House, so that the telescope could be lowered and glass plates inserted near the end of the telescope tube.

Superb photos were taken of the Moon in 1872, and prints were sent immediately to British astronomers to show the GMT’s sharpness and powers. The Royal Astronomical Society in London proudly hung the photo in its meeting rooms.

The GMT was used to take the first photos of nebulae in the southern hemisphere, in February 1883. Successful photos were taken of the Great Nebula of Orion, with exposures of one to four minutes. Images of the η Argus Nebula were not obtained despite exposures of up to 40 minutes because the nebula mostly emits red light, which was not detected by the blue-sensitive photographic emulsions of the time.

Robert Ellery conceded, however, that these photos were more experimental than definitive:

The great obstacle to obtaining photographs of faint objects is the difficulty of keeping such a large telescope steady during a period necessary for the exposure of the plate, so that, when a sufficient exposure has been obtained, the stars are all considerably enlarged from the vibrations and small movements of the telescope in the interval. A certain amount of scientific interest attaches to these experiments, but the results do not yet promise to be of such value as to warrant diverting the telescope from the revision of the nebulae for the purpose.
– Robert Ellery, Report of the Government Astronomer, 1883.

Photography could not yet replace the painstaking work of pencil sketches of observations. 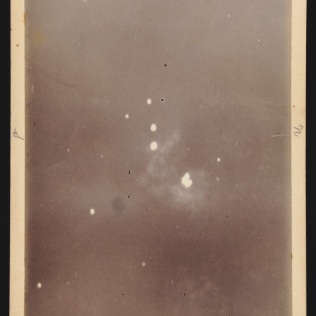 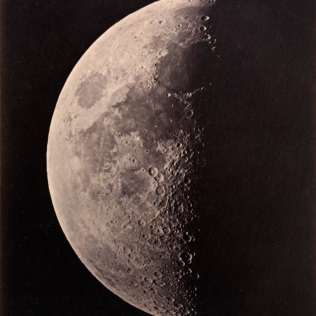 After Melbourne Observatory closed in 1945, the GMT was sold for scrap metal value to the Commonwealth Government’s Mount Stromlo Observatory near Canberra. In the late 1950s a modern telescope was built, utilising parts of the original polar axis, central cube and declination axis. A new 50 inch diameter Pyrex mirror was commissioned from Grubb Parsons, the descendant firm of the original maker.

The 50 inch was used extensively from 1959 into the early 1970s, measuring the brightness of stars. The links to the original telescope remained, with one of the original speculum primary mirrors remaining on the wall of the dome.

In the early 1990s the telescope was rebuilt again, but retained the 50 inch mirror and equatorial mounting. The world’s biggest (at the time) CCD array was installed in 1992 – 8 panels each 2048 x 2048 pixels. Similar technology now lies behind all digital cameras.

In 1993 the telescope was used to derive the world’s first observations of MACHOs (massive astrophysical compact halo objects) – a form of ‘dark matter’. The MACHOs were detected through gravitational lensing, the bending of a star’s light by the gravity of a large astronomical object. In 2000, to look for trans-Neptunian objects, the telescope was completely automated. 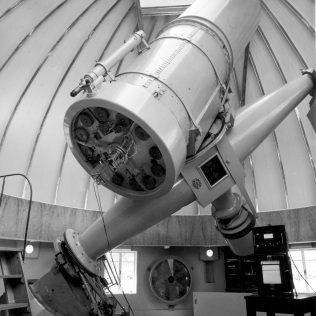 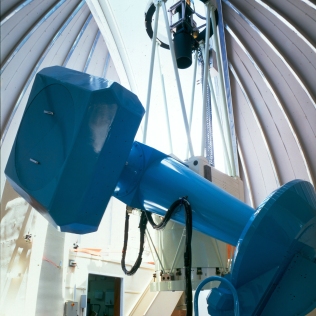